Biz2Credit's Analysis of Bank Failures from 2009 to 2014 Exposes a "Credit Desert" in the South-Eastern U.S. and the Rise of Alternative Lending

Bank Funding of Small Businesses Dried Up During and After Recession, According to the Study

Biz2Credit, the leading online credit marketplace, today released the results of a study of bank failures sorted by state and their impact on small business borrowers.

"The failure of so many small banks in Georgia and in Florida created a Credit Desert," said Rohit Arora, CEO of Biz2Credit, who oversaw the research. "The housing market bust hit particularly hard in the Southeast, which resulted in bank failures and risk averse lending behaviors by those banks that survived. Thus, small business owners were stymied in their attempts to secure capital -- even when their companies had solid credit scores."

A result of banks' reluctance to fund small business ventures was the rise of alternative lenders -- merchant cash advance, factors and other non-bank entities -- in the marketplace. While these lending institutions made financing available, often the money came at a high interest rate.

"Small business owners were caught between a rock and a hard place. If they needed money, many times the only willing lenders were cash advance companies that charged interest rates of 30 to 40 percent." Arora added. "Borrowing money at those rates and terms simply is not a sustainable funding option in the long term."

States with the Percentages of Bank Failures

The states with the largest numbers of alternative lenders on the Biz2Credit platform were consistent with the states that had the most failed banks.

Other key findings of the Biz2Credit "Credit Desert" Report: 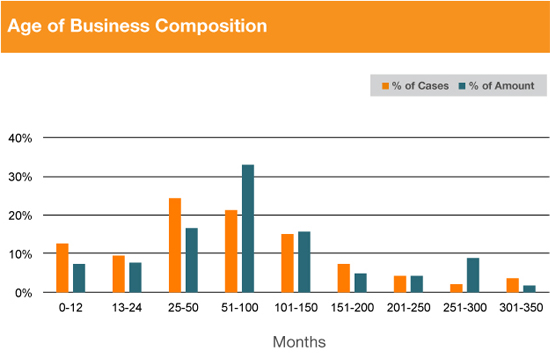 Though more number of loans (24.34%) have been funded where small businesses were between 2-4 years old, funded amount was higher (33.03%) for 4-8 years old businesses. It shows that alternate lenders were hesitant to lend more money to younger businesses during Credit Desert.

Founded in 2007, Biz2Credit has arranged more than $1.2 billion in small business funding throughout the U.S. and is widely recognized as a leading online credit resource for startup loans, lines of credit, equipment loans, working capital and other funding options. Using the latest technology, Biz2Credit matches borrowers to financial institutions based on each company's unique profile -- completed in less than four minutes -- in a safe, efficient, price-transparent environment. Biz2Credit's network consists of 1.6 million users, 1,300+ lenders, credit rating agencies such as D&B and Equifax, and small business service providers including CPAs and lawyers. Visit www.biz2credit.com, follow on Twitter @Biz2Credit, and Facebook at www.facebook.com/biz2credit.