A pharmacy business requires specialized financing to start and sustain the practice, often requiring a combination of working capital, lines of credit, and commercial real estate loans to pharmacists.

Independent pharmacies have weathered - and continue to weather - so many changes. Changes to insurance coverage, government regulation, chain store and online competition, and customer demographics, to name a few. Getting a business loan for a pharmacy can be an added challenge, but fortunately there are programs specifically designed for financing pharmacies.

With growth in both the aging population and the incidence of chronic diseases, the need for safe, legal pharmaceutical drugs has exploded in the last 3 decades.

Both pharmacies and drug stores dispense prescription medications and over-the-counter drugs directly to patients. However, pharmacies have the more complex and varied function of simple distribution as they dispense medication in specific doses, adhere to mandated modes and conditions of storage, and give valuable advice to patients.

Pharmacies practice in a wide range of locations, such as communities, hospitals, clinics, and nursing homes. Other drug retail outlets include supermarkets, independent pharmacies, and online pharmacies; online pharmacies prove especially convenient for those who may be unable to leave their homes. Typically, miscellaneous products like cosmetics and confectionaries also account for a percentage of sales for these retail outlets.

As they do with other health-related professions, lenders recognize pharmacists as high-success vocation, and therefore good credit risks. However, obtaining a pharmacy loan requires understanding the pitfalls and operational obstacles of the pharmacy business.

The chart below shows prescription drug expenditures in the United States from 1960 to 2018. In 2000, this number came to some 121 billion U.S. dollars. Projecting through 2019, it is expected to increase to over 338 billion dollars. 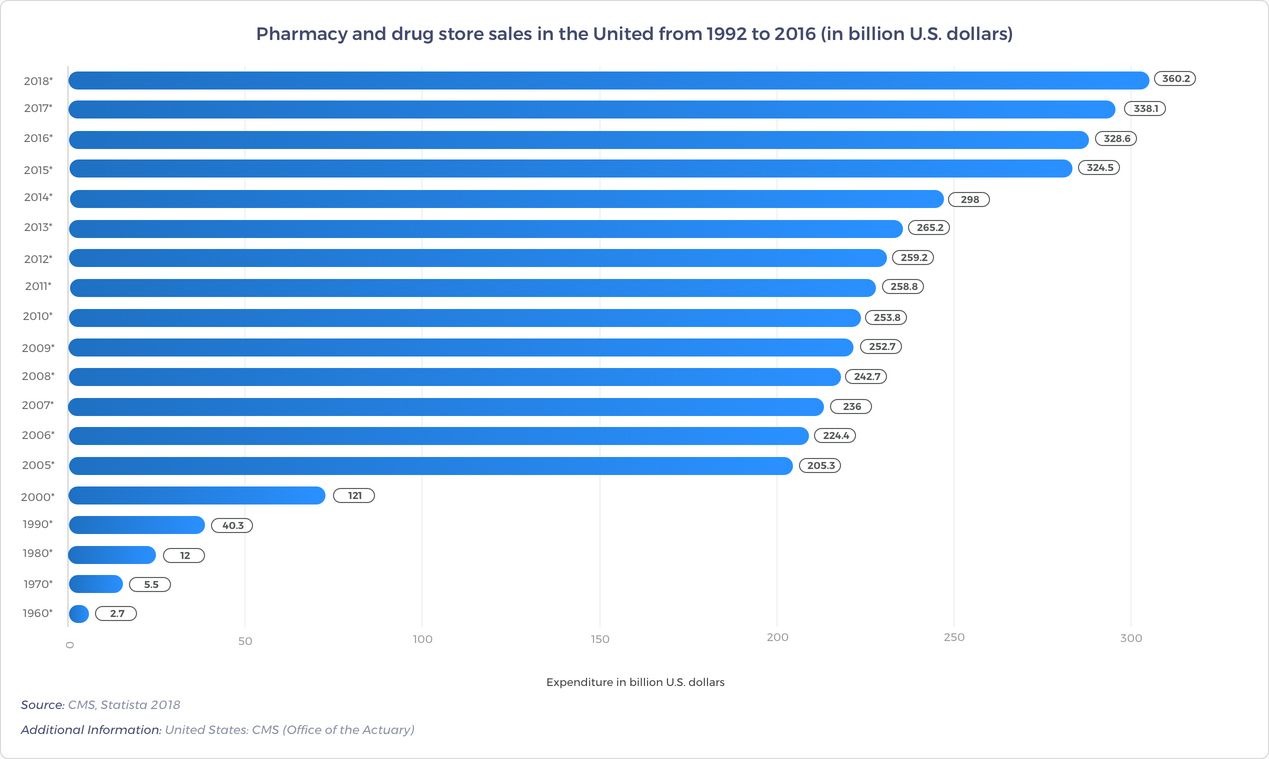 When most people think of a pharmacist, they think of a familiar face they can rely upon to give advice for over-the-counter remedies and guidance on how to administer prescriptions. Who can forget Mr. Gower, the pharmacist in the 1947 Frank Capra film It's a Wonderful Life? The pharmacy business today is almost unrecognizable from that iconic business model . . . and it's now a lot more complex. 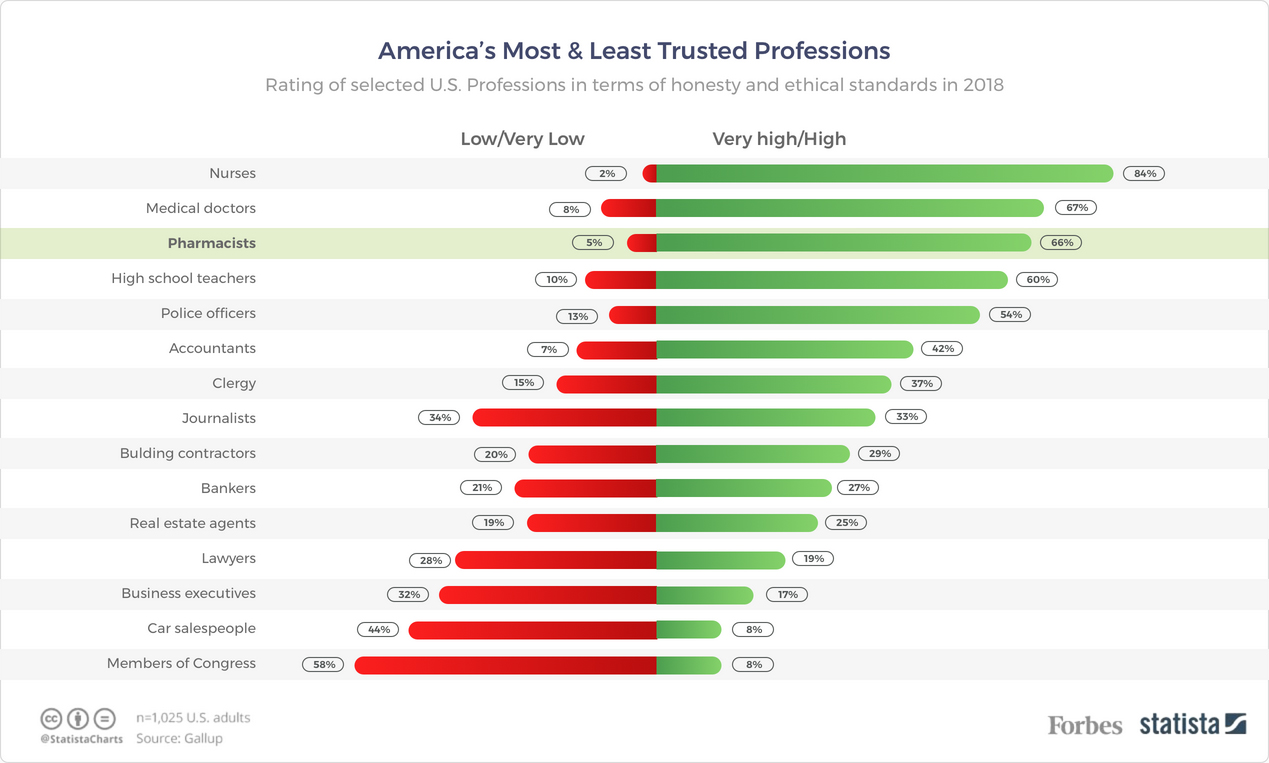 Bigger is Not Always Better

Business Insider reports that when Wellmark Blue Cross Blue Shield cut reimbursements by 50% one Iowa City independent pharmacy lost thousands of dollars. Wellmark Blue Cross Blue Shield was the largest insurer in the state. it caused extreme hardship for community pharmacists. The pharmacist wrote the carrier's CEO, asking him to reconsider, given that his pharmacy was treating sick patients more economically than surrounding pharmacies. The CEO of the insurance carrier did indeed re-evaluate its drug reimbursement policy for independent pharmacies. By both parties working together, the carrier was able to amend the reimbursement rates for community pharmacists while lowering overall healthcare costs for their insured customers.

These are among a handful of recent developments showing how independent pharmacists are able to deliver a higher quality of service that not only improves better outcomes for patients, but also boosts the bottom line for insurers. This type of partnership sets a precedent for community pharmacists and offers another indication of the industry's staying power and longevity. It's also another reason that pharmacists enjoy favorable financing when applying for pharmacy loans. 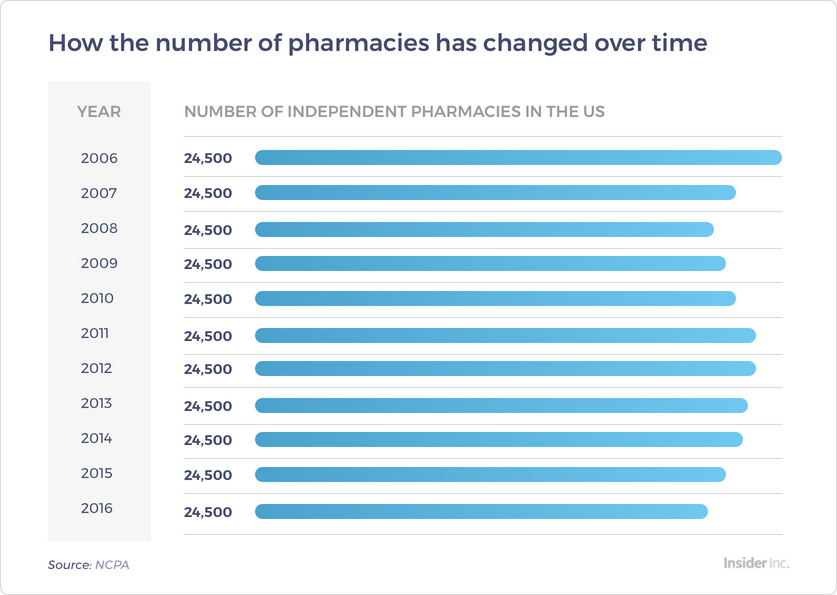 You would think with competition like that, nobody would have the courage to enter this marketplace, and certainly not want to apply for a pharmacy loan, right ? On the contrary, family-owned and independent pharmacies have learned to survive and thrive among the giants that threaten to crush them.

In many areas, large national and regional chain pharmacies may try to replace the corner drug store. But they can't replace human touch.

One of the most enduring qualities of a community pharmacist is their accessibility as healthcare providers - patients can come in either with or without an appointment. It's no wonder that independent pharmacists have endured the onslaught of chain pharmacies and corporate consolidation. It is this unique quality that ensures independent pharmacies are here to stay for the foreseeable future.

The pharmacist is responsible for:

Not only are these skills technical requirements, they comprise a patient safety net. Often, customers have come to rely upon their pharmacists as much as their physicians.

According to the National Community Pharmacist Association (NCPA) there are over 22,000 independent pharmacies in the United States, employing over 250,000 people. Approximately 26% of pharmacy owners own 2 or more pharmacy store locations, a testament to the health of the industry despite the encroachment of the national chain stores.

The result of the convergence of these trends has been the growth and frequency of drugs prescribed to elderly patients, plus an entirely new need to coordinate medical drug therapy and administration.

Some new services being administered by independent pharmacists include: