Borrowing money is a fact of life when it comes to owning a business; it’s very rare that your monthly payments on any number of small business loans won’t be a part of your financial calculus every mo nth. Depending on the loan type you take out to run your business, there might be several different interest rates on several different loans. Some of those interest rates might change for reasons outside your control. Why is that?

Everything You Need to Know about Fixed Rate vs. Variable Rate Loans

In this guide, we will discuss several key concepts that any small business owner should be aware of when it comes to fixed rate and variable rate loans. Importantly, here are some of the key questions that we will answer in this guide:

Why are Interest Rates so Complicated?

First thing’s first. Lenders want to make money just like any other business. So, when they lend money, they charge interest, money that you pay to borrow. The better your credit score, the lower the interest rate. That’s because interest rates are essentially about mitigating risk. A lower credit score typically indicates that a borrower is less likely to repay the loan, so higher interest rates protect the lender from losing money.

But risk mitigation works both ways. While exploring your financing options, you’ll likely find that loans are available with fixed interest rates and variable interest rates. What’s the difference, and why should you care?

What are Fixed Interest Rates?

Fixed-rate loans are term loans in which the interest rate is agreed upon at signing and doesn’t change throughout the life of the loan. If you borrow $80,000 at 8% interest, you’ll pay 8% interest on your first monthly payment, and you will pay 8% on your last monthly payment. These are the more common types of loans, though they have several upsides and downsides.

Is it Better to Have a Fixed or Variable Rate Loan?

It’s difficult, if not outright impossible, to say whether one type of interest rate is better than the other. Even the same borrower can put him or herself at a massive advantage by getting a fixed-rate loan at one point in their business’s life cycle, then suffer a huge loss by getting a fixed rate later.

Consider some of the pros and cons of each type of interest rate and compare those attributes to your company’s current needs.

Upsides of a Fixed Interest Rate

The most notable upside of a fixed interest rate is that you’re going to be able to predict exactly how much you’re spending on repaying a given loan in any month over the entire life of the loan. If you’re planning on expanding your business years down the road, you can make those plans knowing what you’ll owe on every fixed-rate loan.

It seems obvious, but that’s an important piece of knowledge. It allows you to build loan repayment into your business plan, your budgets, and your goals. Repayment terms aren’t going to change, and that allows you to build the future of your company around paying back that loan.

Another huge upside to fixed-rate loans is that once you’re locked into an interest rate, it doesn’t change. By definition. No matter the circumstances over the course of the repayment term, your loan repayment will stay the same. That can be hugely beneficial. If the greater economic environment ends up resulting in higher interest rates for business loans, your loan is unaffected. If for some reason your creditworthiness takes a hit, your interest rate is unaffected. The only way the interest is going to change on a fixed-rate loan is if you choose to refinance the loan. Chances are, you’re doing that because you’ve improved your credit since the dispersal of the original loan. Your interest can only decrease.

Downsides of a Fixed Interest Rate

The Interest Rate can be Higher than a Variable Rate

Remember, the lender is effectively placing a bet on your ability to repay the loan. And because there’s no chance of the interest rate increasing, you’re going to pay a premium on that rate. If you’ve got a fixed interest rate and the time comes for a variable rate to increase, the lender is effectively losing money by lending to you. So, you’ll face a higher rate at the outset.

A Fixed Rate Loan Can be Harder to Qualify For

Because there’s the risk that lenders will lose out on money by not increasing your interest rate when the prime rate increase (more on this later), lenders will want borrowers to have pristine business credit and personal credit if they’re going to get a fixed rate.

Fixed Variable Rates can be More Expensive... Most of the Time.

Because of that higher interest rate for the reasons discussed above, fixed-rate loans can be a more expensive lending option over the long term. There’s one exception: when the prime rate falls. In that situation, holders of a fixed-rate loan won’t see any benefit from the lower interest rates other borrowers are benefiting from. Instead, you’ll be stuck at the same interest rate you’ve always had.

What are Variable Interest Rates?

That changing interest rate can be the London Interbank Offered Rate (LIBOR), which is what UK banks are charging to their most creditworthy borrowers, or it can be set at the U.S prime rate. The prime rate is basically the best interest rate any entity is getting at a given time, typically large corporate borrowers from massive banks.

Instead of structuring the loan as a particular percentage, like 7.1% in the earlier example, a variable rate might be structured as “the prime rate + 3.5%.” The prime rate as of March 2022 is 3.5%, so the interest rate on that variable rate loan would be 7.0%.

However, if the prime rate changes, so does the interest rate. A .5% increase in the prime rate could cost thousands over the lifespan of a loan, particularly if the loan amount is large.

Similarly, if the prime rate decreases, it could save significant money for the borrower (much to the chagrin of the lender).

Upsides of a Variable Interest Rate

Variable-rate loan providers often set a lower introductory interest rate to entice borrowers. If the prime rate doesn’t change, or if the borrower is able to make extra payments early on, the loan will end up less expensive than many fixed-rate loans. In addition, there’s always the chance that the prime rate drops, leaving you with a smaller interest rate than you expected.

That low introductory interest rate offers up another opportunity. If you’re able to make aggressive payments early on, you can get ahead of paying increased interest on the remaining principal when those low-interest rates go up.

Downsides of a Variable Interest Rate

Variable Interest Rates can be Unpredictable

While the holder of a fixed-rate loan can plan months and years in advance, knowing exactly how much they’re going to owe to their lenders, that’s simply not the case for holders of variable-rate loans. Who knows what the world will look like in a year? In three years? According to JP Morgan, the prime rate in March 2020 was 4.25%. In August of 2019, less than a year earlier, it was 5.25%. You simply don’t know what the rates will be on a given date, and that makes variable rates risky.

Sure, you can afford those payments at the low introductory rate now. But if the prime rate goes up 2%, will your cash flow be sufficient to sustain your company? Will you be able to meet your business needs without seeking out additional financing (at a likely even higher interest rate due to your decreased debt-to-income ratio and higher prime rate overall)?

Interest Rate is Outside of Your Control

While your credit, whether it’s good or bad credit, will help set your initial interest rate, the unfortunate truth is that changes to a variable interest rate on your loan are effectively outside your control. If the Federal Reserve decides to increase interest rates based on the political climate halfway across the universe, it could cause your yoga studio in Boise to lose working capital. That is the risk of a variable rate loan.

And remember, the longer the repayment terms, the greater the risk. It’s highly unlikely that prime rates will increase massively in the short term. But over the course of several years, there’s a greater chance for greater variance. So, when you’re looking at a large loan at a tiny variable rate, remember how much risk you’re taking on.

Which Type of Interest Rate Should You Choose?

As is the answer to so many questions in the world of business financing, the answer is very simple: it depends. There are a few important factors to consider when researching your fixed and variable rate loan options.

If you’re the type of business owner who is afraid of taking risks, a fixed-rate loan is your best option, full stop. While as we’ve seen, a variable rate can be less expensive, that isn’t a guarantee. These interest rates can also rise, costing your company thousands and choking off valuable cash flow.

Review the history of interest rates and consider whether you believe that rates are likely to go up or down. Rises in interest rates can be tied to inflation, world events, and consumer confidence. While you’re certainly not going to be able to tell with 100% certainty, it’s a valuable exercise to consider past trends. If the economic habitat is currently healthy, it might be wise to seek a variable rate.

Variable rates will affect larger loans more than smaller loans. Think of it this way. If you take out a loan of $300,000 with a loan term of 60 months and an interest rate of 8.0%, you’ll be making $6,082.92 monthly payments, and you’ll pay $64,975 in total interest. If that interest rate jumps just half a percent, payments jump an extra hundred dollars per month, and you’ll add $5,000 in total interest payments.

A variable rate on a smaller loan will mean that changes to the prime rate won’t affect your monthly payments or total interest costs as much.

As noted earlier, if your loan is a short-term loan, you’re going to be less likely to encounter wild swings in interest rates just because you’ll spend less time paying back the loan. Even a risk-averse business owner could consider a variable rate loan if the term is short enough - it’s just not very likely that the interest rate will change.

Some types of loans feature more commonly fixed or variable rates. For example, business lines of credit often come with variable interest rates. In a business line of credit, you don’t make payments immediately. Instead, you make payments on (and pay interest on) any money you borrow under a certain credit limit (much like a credit card). Lenders will typically have variable rates on these lines of credit because it’s impossible to tell whether today’s interest rate will make sense in a year, particularly given that the line of credit might not even be used for a year.

Similarly, many SBA loans (term loans guaranteed by the United States Small Business Administration (SBA) have interest rates that depend on the prime rate. Others, like the SBA 504 Loan, will have a fixed rate. Other SBA loans will depend on your credit and eligibility based on the age of your company, the amount of money you’re seeking, and the industry in which you operate.

If you’re financing a particular project, the nature of your project may dictate exactly which type of loan you should seek, and thus whether your interest rate is fixed or variable. 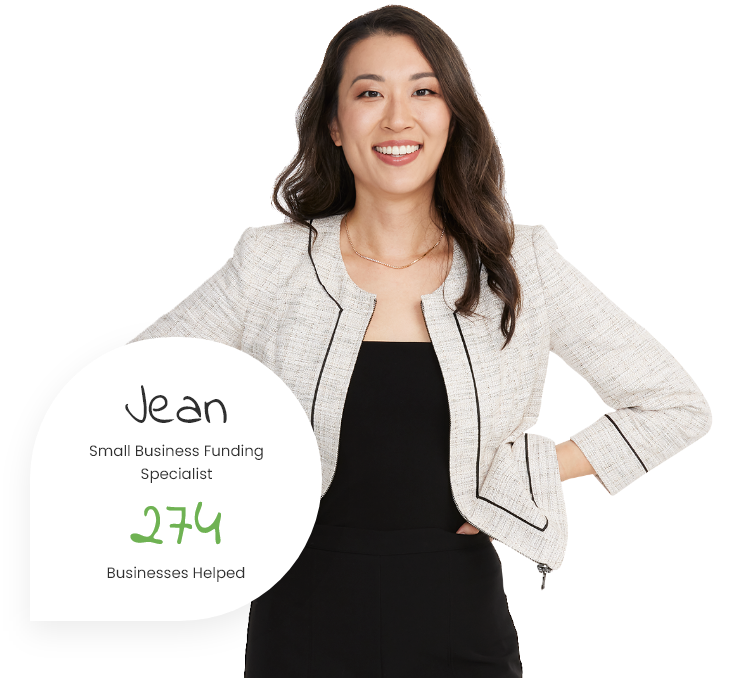 We've got your back for whatever business you run

You're here because you have big goals. Ours is to ensure businesses of all kinds are connected to the best funding solutions for their needs.

Behind our fast funding, reasonable rates and terms are human beings who keep an efficient, price-transparent environment top of mind.

We'll be direct about it.