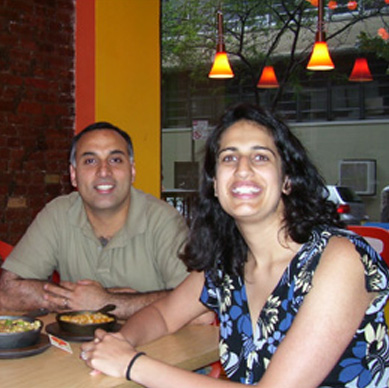 This year marks the 10th anniversary for S'Mac. By 2014, the company had two locations, and the couple began looking for some additional working capital and to purchase equipment/make renovations at the original location.

On June 24th, 2006, nine months after the idea was conceived, S'MAC opened its doors, offering 10 variations of macaroni and cheese. Sarita manages the day-to-day operations of the restaurant, as well as its finances, payroll, and vendor relations. She is also continually playing with the menu, creating seasonal specials, and ensuring that whatever a customer's palate, there's a mac & cheese to please. "We found Biz2Credit through PayChex, our payroll processing company at the time," said Sarita, who was born and raised in Nova Scotia, Canada, but considers herself a first-generation Indian.

"We've got a unique situation with our product because we run a mac & cheese business and our price point is quite affordable," Sarita explained "We opened our doors in 2006 before the economy quickly spiraled out of control, but our business actually went up because we have a very affordable product that's very comforting."

"In downtrodden situations mac & cheese is a comfort. In 2008, our business grew significantly and has grown for a number of years," Sarita added. "We're still in the growth state, but are starting to slow down a little since we've been open for so many years. Moving forward in the economy, our goal is to bring in more repeat business and draw new customers. We're confident in the prospects of our business moving forward."

"Moving forward in the economy, our goal is to bring in more repeat business and draw new customers. We're confident in the prospects of our business moving forward."